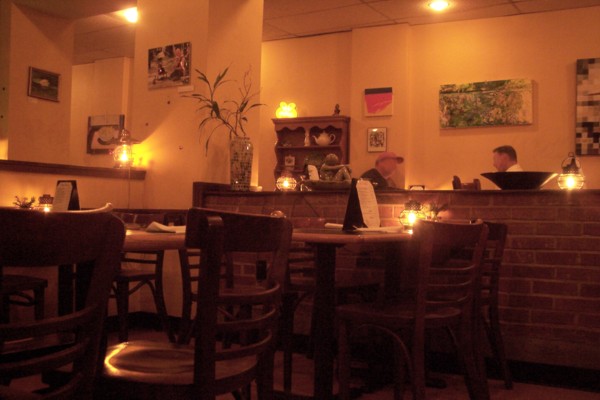 A question that we hear more often than most at Boston's Hidden Restaurants is, "Are there any good places to eat in Charlestown at all?" Well, there sure are, and while decent dining spots in this historic Boston neighborhood are perhaps relatively few and far between compared to, say, the South End or the North End, Charlestown does have a variety of places from which to choose. Several of these spots are definitely under the radar, including a cozy Thai restaurant named Chow Thai Cafe that very few outside of the neighborhood seem to know about, probably because it is just outside of the section of Charlestown that visitors tend to frequent.

Chow Thai Cafe is a spacious and comfortable place, with an overall atmosphere nicer than many other Thai spots in the Boston area. A high ceiling, wooden floor, exposed brick wall, and dimly-lit table lanterns give this restaurant an almost romantic feel, with both dining sections and the small bar area being charming, warm, and inviting. The owner of Chow Thai Cafe makes customers feel at home, going from table to table to talk with patrons and calling regulars by their first names, while the rest of the staff is similarly friendly and low-key, making for a truly pleasant dining experience.

Admittedly, Chow Thai Cafe isn't quite at the level of such top spots in the Boston area as Montien in the Theater District of Boston and Dok Bua in Brookline, and indeed the restaurant does seem to focus more on familiar Thai and Thai-American dishes rather than on the more exotic entrees of a place such as Dok Bua. But the menu at Chow Thai Cafe is good, solid fare and the menu does include a handful of authentic dishes, especially at dinnertime. Menu items include such starters as a chicken wonton soup with a nice balance of vegetables (including garlic), a miso soup with lots of tofu and a good amount of seaweed, fish cakes that have a spicy curry paste added, and pork dumplings that can be ordered steamed or fried, and are served with a mild yet tasty ginger sauce. Entrees include all the familiar dishes (pad Thai, drunken noodle, massamun curry, tamarind duck, mango fried rice, etc.), but a few less common dishes are also offered, such as the wonderfully spicy pan-fried bamboo shoots which are mixed with a number of vegetables and include a meat option, and the chili chicken dish (a dinner-only house specialty), which has sauteed ground chicken mixed with vegetables such as squash and string beans, and has some decent heat coming from the Thai peppers which are included. Beer and wine are served at Chow Thai Cafe, as are tea, coffee, mango orange juice, and more. Desserts include a mild Thai custard with a mashed potato-like consistency (perhaps an acquired taste for some), a fried banana roll with ice cream, and a Thai creme brulee.

Charlestown is by no means a destination spot for dining, but there are some impressive restaurants in this compact neighborhood just across the water from downtown Boston. And Chow Thai Cafe is surely one to consider, especially if you like places that are little-known and a bit off the beaten path. It may not quite be in the upper echelons of Thai restaurants in the Boston area, but it's tough to argue against a spot that has decent food, great atmosphere, easy parking (for Boston, anyway), and an overall lack of crowds, all of which make Chow Thai Cafe a place we think is worth checking out.

Similar restaurants can be found in these categories:
Thai Restaurants,
Restaurants in Boston
Moderately Inexpensive Restaurants

Other Pages You Might Like:
Dinner at a Jam-Packed Sugar and Spice, Cambridge (blog entry)
Where to go in Charlestown for food? (questions, answers)
Court House Seafood, Cambridge, MA (unreviewed restaurant)