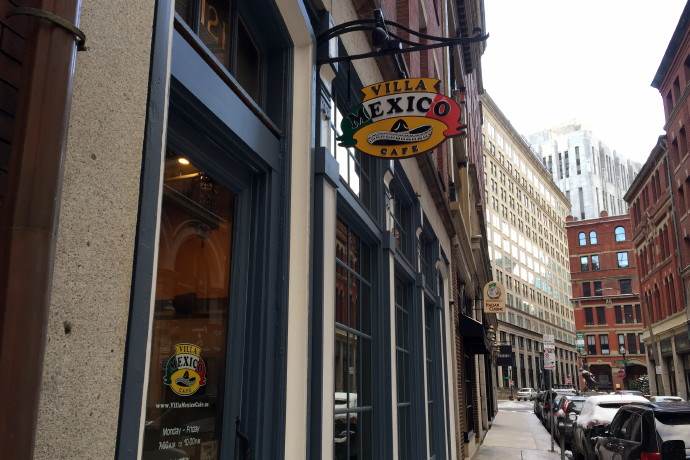 The Greater Boston area has its share of dining spots that reside in rather odd places, such as eateries in the back of convenience stores (Vinny's at Night in Somerville), restaurants that are located in former (as well as still-operating) prisons (Clink in Boston and the Fife and Drum in Concord), and a watering hole that is located in the middle of nowhere on a narrow wooded side street by a pond (Dudley Chateau in Wayland). And one of the oddest of them all was a friendly little dining spot in the back of a Beacon Hill gas station called Villa Mexico. Sadly, this one-of-a-kind eatery was forced to close in early 2013 to make room for new development, but fortunately for Mexican food lovers around the city, Villa Mexico returned several years ago, moving into a new home in downtown Boston, and while its location is no longer unique, its food items--and its owners--certainly remain so.

Located on Water Street, a quiet, narrow road near the northern edge of the Financial District, the new location of Villa Mexico is actually a bit more "hidden" in some ways than its previous location on busy Cambridge Street in Beacon Hill, but because it now has its own space and a prominent sign out front, it isn't nearly as easy to miss as the old shop. A large counter where customers place their orders dominates the interior of the place, with several stools set up by the front windows and just a bit of additional room by the stools for extra chairs and tables when needed. Much like the old location, the new Villa Mexico really is mainly a takeout spot, though at any given time the stools are full of folks dining on breakfast, lunch, or (early) dinner items.

All of the food at Villa Mexico is made fresh, so even though much of it is considered "fast food," it can take a few more minutes for the items to be prepared than what some might be used to at the national chains. A few highlights include the crispy tortilla chips that come with a house-made guacamole that has a slight kick to it and a smoky roasted pepper salsa that may be the best item of them all here; simple but delicious soft corn tortilla tacos, which can be ordered with marinated beef, chicken, pork, or chorizo (Mexican sausage), with the latter being a particularly great option; tamales that have a great texture and aren't greasy at all, with the shredded beef option being particularly good (and they can pack quite a punch in the heat category if you wish); freshly-made quesadillas that will make you forget about the ones often found in bars and chain restaurants; burritos that are among the best in the entire Boston area and can be ordered with mole poblano, chicken, pork, beef, or chorizo; a tremendous mole poblano plate that includes shredded chicken with a deep-tasting mole sauce, along with rice, beans, and salsa; and for dessert, a melt-in-your mouth tres leches cake and a similarly creamy flan. Prices at Villa Mexico are very reasonable (especially for downtown Boston), with prices for items mostly being around the $10 mark.

The current location of Villa Mexico might not have the sense of discovery that the Beacon Hill location had, but it remains a bit of an under-the-radar spot that happens to be a short walk from some of the busiest parts of Boston. Combine this with its marvelous food and its friendly owners (Julie and Bessie King) who give new meaning to the word "hospitality" and you have a place that has the makings of a Boston institution, even as it keeps its "hidden gem" label intact.

Similar restaurants can be found in these categories:
Mexican and Latin Restaurants
Restaurants in Boston
Cheap Eats