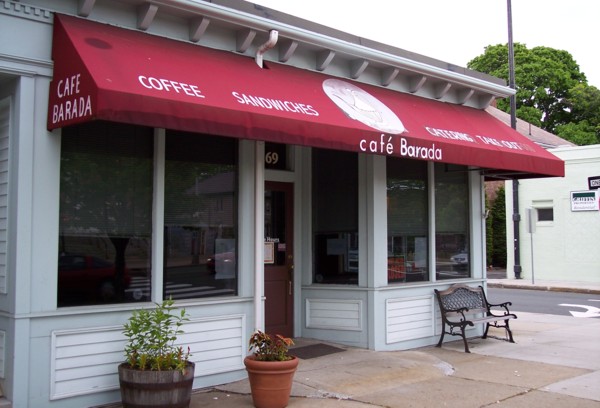 It isn't all that easy to find a good Middle Eastern restaurant in the Boston area. Sure, there are a handful of top Middle Eastern spots, such as Cafe Jaffa in the Back Bay and Sultan's Kitchen in downtown Boston. But there aren't too many others, and it seems like some of the really good ones (Sepal in Watertown, Reef Cafe in Allston) have closed over the past few years. There is one Middle Eastern restaurant, however, in North Cambridge, that is both excellent AND little-known. It is called Cafe Barada, and while it has been around for a long time, it still remains under the radar.

The Lebanese-owned Cafe Barada has not always been in North Cambridge, having moved from Arlington a number of years ago. It is small, with seating for about 20-30 people, but that is one thing that makes the homey Cafe Barada appealing. And the owner of Cafe Barada maintains the warm appeal of the restaurant, as he is about as nice a person as you will find in the restaurant business. On one visit to the place, not many patrons were in Cafe Barada. The owner was waiting the tables, and he went out of his way to make sure we were satisfied with our dining experience. In an era when service is often lacking, Cafe Barada needs to be commended for showing the others how it is done.

Of course, great service doesn't count for much if the food isn't good, but Cafe Barada serves meals that are fresh, tasty, and very satisfying. The house-made lentil soup has lots of greens as well as exotic spices that give it a complex flavor; the tightly-wrapped stuffed grape leaves are filled with rich ground beef and, unlike those of many other places, are not smothered with oil; the hummus is perfectly smooth and has just enough lemon and olive oil; the falafel is meaty and dense, with a terrific texture; and the grilled chicken salad is delicious and can easily be a meal in itself. For those who like sandwiches, Cafe Barada has some good options, including a fantastic (and very filling) falafel and hummus wrap.

Cafe Barada is situated in a part of North Cambridge that has every kind of restaurant imaginable, from Thai to Chinese to Greek to even Himalayan. And all of these restaurants are good, particularly Qingdao Garden, and Greek Corner, both of which are up the street from Cafe Barada. The menus at Cafe Barada and Greek Corner overlap a bit, as they both feature Mediterranean food. But Cafe Barada is the restaurant to go to if you're hungry for great Middle Eastern food, and it is indeed a spot that gives most Middle Eastern restaurants in the Boston area a run for their money.

Other Pages You Might Like:
Ten Dishes for College Students in the Boston Area (blog entry)
How is the Kasbah in Winthrop? (questions, answers)
Istanbul Cafe, New Haven, CT (unreviewed restaurant)